delivery faster / contact us if you want to pay with wise, skrill, payoneer

Looking back at Windows 8, it’s easy to see where Microsoft went wrong. It was a giant bet on touch-based computing, but it made using a PC with a keyboard and mouse awkward, frustrating, and outright confusing. In our original review, I wrote that there was a “risk of alienating users and creating another Vista-like perception catastrophe” due to the sweeping changes.

That’s exactly what happened: developers didn’t flock toward Windows 8, and regular users did their very best to avoid it. While the tablet interface was a great experience, the rest annoyed everybody who just wanted a laptop that worked the way they were used to. Microsoft is trying to fix all that with Windows 10.

It’s nice to be on the good part of the cycle.

READ NEXT: THE INSIDE STORY BEHIND WINDOWS 10

If you’re upgrading to Windows 10 on a desktop or laptop PC, then prepare to be delightfully surprised: the Start menu you know and love is back. It feels slightly odd to celebrate its return, as it should never have gone away. It’s probably the biggest change, aside from the dark theme, that you’ll notice after Windows 8. But Microsoft hasn’t simply just reinstated the old version from Windows 7. Instead, it’s completely redesigned it in a way that combines the best aspects of the last two versions of Windows.

Instead of booting you a completely different screen, the Start menu lives in the lower-lefthand corner — just like it did in Windows 7. Microsoft is keeping the Live Tiles it introduced in Windows 8, but it’s put them inside the Start menu. That means that they won’t take up your entire monitor anymore (unless you really want them to). You can pin both modern and traditional apps to the Start menu, and there’s easy access to settings, shutdown or restart, and a list of most-used apps complete with handy jump lists for apps like Word that handle files. This mix of features feels like the best approach for bringing the Start menu back, and you can resize it freely to customize it further.

It seems like every version of Windows brings a different theme, and Windows 10 is no different. It’s more restrained than Windows 8 or Vista were — but not as boring as Windows 7. A black theme sets the stage for Windows 10, but if you’re not a fan of the darkness, then there are options to pick an accent color that can be shown on the Start menu, task bar, and the new Action Center. Across all three, you’ll notice subtle transparency effects have returned to Windows 10 from their roots in Windows Vista and Windows 7. Microsoft hasn’t added any transparency to built-in apps like File Explorer, so the effect isn’t overplayed or irritating. It feels utilitarian, but in a modern way.

Navigating around Windows 10 is also greatly improved. The annoying hot corners in Windows 8 that made you pull your hair out just trying to access settings or even the Start screen have been removed — thank god. A new Action Center works as a notification center to collect alerts from apps and provide quick access to settings.

Microsoft has focused a lot on multitasking with Windows 10. The Snap feature has seen the biggest improvements here. You can drag any window to a screen edge to snap it to half of your screen, and then the OS helpfully displays all of your other windows in an array for the other half. If you use a touchscreen, you can swipe from the left to bring up a list of all open apps and snap two of them alongside each other.

Alongside the snapping improvements is a new feature called Task View, which is a lot like Mission Control on the Mac. It displays all your open windows on a single screen so you can find what you’re looking for quickly. Microsoft has added a dedicated button to the task bar to try and get Windows 10 users to activate Task View and start using it. Microsoft claims the vast majority of its users have never used Alt+Tab to switch apps (one of those "weird but true" things about computers), so the idea is to help those users get better at multitasking.

That little button is also the gateway to a great new feature: virtual desktops. Yes, Microsoft has finally added this to Windows after years of having to use third-party alternatives. It’s a true power user option, allowing you to create separate virtual desktops with different apps. I consider myself a Windows power user, but I only find myself using virtual desktops on my laptop rather than my desktop PC. There’s no quick way to switch between virtual desktops using a trackpad or mouse, but Windows key + Ctrl + left / right is a handy shortcut. I find the quickest way to access Task View (and virtual desktops) is simply by swiping up with three fingers on a trackpad.

Microsoft has also built a virtual assistant like Siri right into Windows 10. It’s called Cortana, and it’s designed to look and feel like an extension of the Start menu, and just like the Windows Phone equivalent, you can also use your voice to search. There’s also an option to enable a "hey Cortana" feature that lets you simply holler questions at your laptop. It’s useful for simple things like the weather, but I found myself mostly using it to demonstrate Cortana to friends and family.

Cortana’s visual interface is a lot more useful. It’s an overview of your day mixed with the weather, news, local restaurants, and other interests you’ve selected. I tap on Cortana’s icon in the task bar occasionally to see this overview, and all the data is displayed in sections that resemble Google’s Now cards.

Cortana keeps everything it knows about you in a virtual notebook, which you can edit to trim out information you don’t want it to remember. It’s also cloud powered, meaning you can download Cortana for Android (or iOS in the future) and get the same features there, all synced up with your laptop. So if you ask Cortana to remind you to buy some milk from a local grocery store, that reminder will sync to your phone and activate as soon as you’re near the grocery store. That’s a particularly useful and powerful feature of Cortana, and it’s one I find myself using regularly.

Cortana also handles local search, and it’s excellent. Hitting the "My Stuff" button within a Cortana search will search for files that are local to the machine and any data stored on OneDrive. Having a single interface for virtual assistant searches, web searches, and traditional computer searches is a super convenient and powerful thing, and Microsoft has done a really great job of integrating it here. It might be my favorite thing about Windows 10. 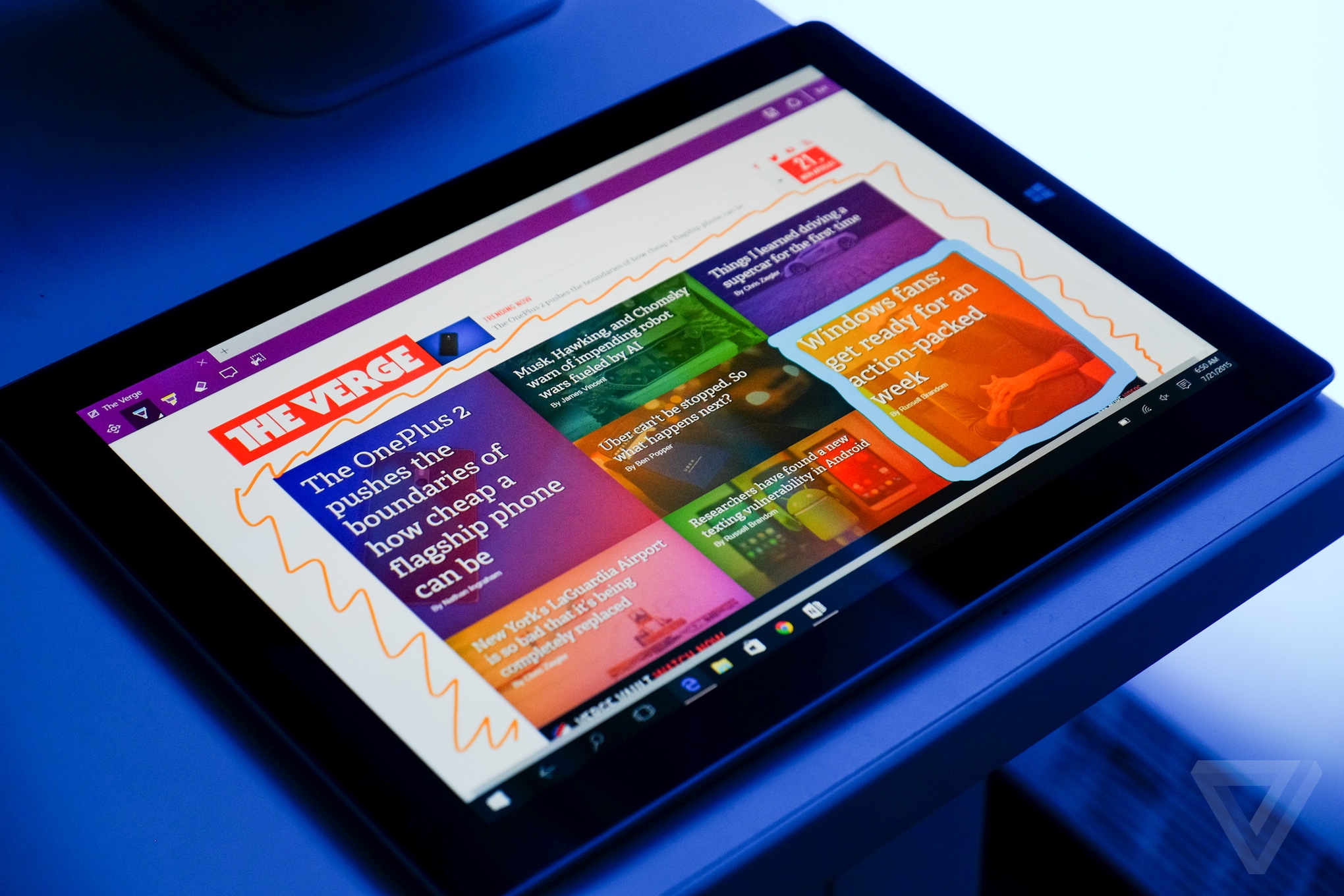 Windows 10 also includes a new browser, called Edge. It may be new, but it sadly sticks to the past in a number of ways. Edge’s task bar icon is barely different from that of Internet Explorer, in an effort to keep it familiar to the millions of diverse Windows users. It’s simplified, clean, and performs well in most cases — but it’s lacking features you might expect of a modern browser. Snapping tabs into new windows is messy and clunky, and downloads start automatically with no choice of where they’re being stored. This is basic stuff, and it’s surprising it’s missing. Microsoft really started from scratch with Edge, and it shows.

PreviousLet’s Get Physical: How to Get Your Creative Work Seen with Print
NextIPTV :Netflix loses subscribers for the first time in ten years